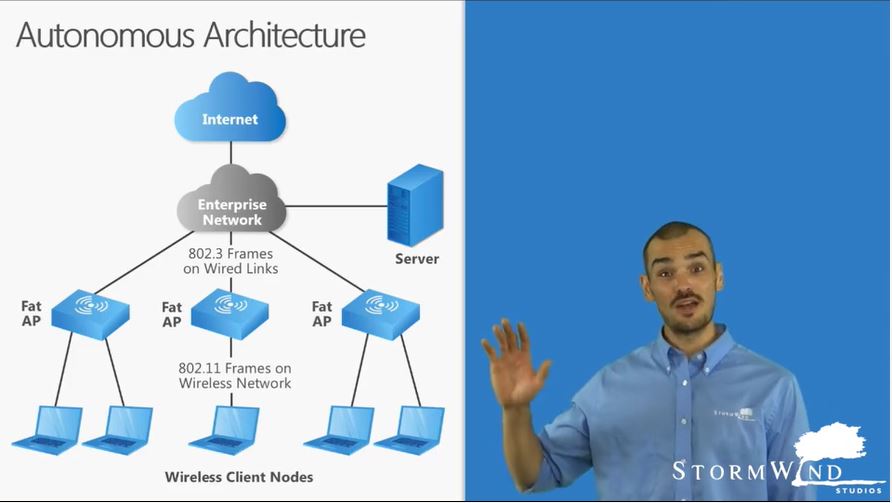 [image_with_animation image_url=”15999″ alignment=”center” animation=”None” box_shadow=”small_depth” max_width=”100%”]As an internet user, you have three ways to manage your access points; the Autonomous Architecture, the Cloud-Based Architecture and the Split-MAC Architecture. In this week’s VBlog, Dan Goodman explains each and dives further into their implications and how they can benefit managing access points. (scroll down for video)

If you’re navigating around the internet, you are probably traveling through an access point. An access point acts as a central transmitter and receiver of wireless radio signals. Mainstream wireless APs support what we all know and love today: Wi-Fi. Wireless access points (APs or WAPs) are networking devices that allow wireless Wi-Fi devices to connect to a wired network. The access point can be incorporated into the wired router or it can be a stand-alone device. Wi-Fi hotspots commonly deploy one or more wireless APs to support a Wi-Fi coverage area. Emergent Tech sees the next big thing for Wi-Fi being multiple access points in every home. In this week’s VBlog, Let StowmWind instructor, Dan Goodman explain the 3 ways of managing these access points and their implications. (scroll down for video)[image_with_animation image_url=”16005″ alignment=”” animation=”None” box_shadow=”none” max_width=”100%”]Autonomous Architecture is the oldest and easiest to explain. Frequently referred to as heavy APs, autonomous APs are stand-alone access points with fully integrated intelligence. No matter how many you have, they are all managed individually. Therefore, because these points are fully self contained, you lack centralized control as a user. This budget friendly form of access is intended for smaller organizations that have small deployment[image_with_animation image_url=”16006″ alignment=”” animation=”None” box_shadow=”none” max_width=”100%”]This is almost a ‘hybrid’ between Autonomous and Split-MAC architecture. For example, within Cisco Meraki are considered autonomous access points, but from the cloud dashboard you have the ability to manage and coordinate your access points relating it to the split-MAC architecture. All of the managerial functions are available to you in the cloud. This managerial style can be useful to administrators we want to be able to oversee remotely.[image_with_animation image_url=”16008″ alignment=”” animation=”None” box_shadow=”none” max_width=”100%”]Large scale deployment should consider split-MAC architecture. Well what does split-MAC mean? What this means is that the management process is divided into two separate streams of data. All access points will get configuration from a designated controller who will orchestrate the entire process and have the ability to see all access points and coordinate them accordingly. Because everything is centralized, this leads to reduced overhead costs.

While there are of course pros and cons to all three, let Dan Goodman show you their implications from a design perspective to see which is best for your organization’s requirements.JTNDc2NyaXB0JTIwc3JjJTNEJTIyaHR0cHMlM0ElMkYlMkZmYXN0Lndpc3RpYS5jb20lMkZlbWJlZCUyRm1lZGlhcyUyRnJoa3J2OXhtdjQuanNvbnAlMjIlMjBhc3luYyUzRSUzQyUyRnNjcmlwdCUzRSUzQ3NjcmlwdCUyMHNyYyUzRCUyMmh0dHBzJTNBJTJGJTJGZmFzdC53aXN0aWEuY29tJTJGYXNzZXRzJTJGZXh0ZXJuYWwlMkZFLXYxLmpzJTIyJTIwYXN5bmMlM0UlM0MlMkZzY3JpcHQlM0UlM0NkaXYlMjBjbGFzcyUzRCUyMndpc3RpYV9yZXNwb25zaXZlX3BhZGRpbmclMjIlMjBzdHlsZSUzRCUyMnBhZGRpbmclM0E1Ni4yNSUyNSUyMDAlMjAwJTIwMCUzQnBvc2l0aW9uJTNBcmVsYXRpdmUlM0IlMjIlM0UlM0NkaXYlMjBjbGFzcyUzRCUyMndpc3RpYV9yZXNwb25zaXZlX3dyYXBwZXIlMjIlMjBzdHlsZSUzRCUyMmhlaWdodCUzQTEwMCUyNSUzQmxlZnQlM0EwJTNCcG9zaXRpb24lM0FhYnNvbHV0ZSUzQnRvcCUzQTAlM0J3aWR0aCUzQTEwMCUyNSUzQiUyMiUzRSUzQ3NwYW4lMjBjbGFzcyUzRCUyMndpc3RpYV9lbWJlZCUyMHdpc3RpYV9hc3luY19yaGtydjl4bXY0JTIwcG9wb3ZlciUzRHRydWUlMjBwb3BvdmVyQW5pbWF0ZVRodW1ibmFpbCUzRHRydWUlMjB2aWRlb0ZvYW0lM0R0cnVlJTIyJTIwc3R5bGUlM0QlMjJkaXNwbGF5JTNBaW5saW5lLWJsb2NrJTNCaGVpZ2h0JTNBMTAwJTI1JTNCd2lkdGglM0ExMDAlMjUlMjIlM0UlMjZuYnNwJTNCJTNDJTJGc3BhbiUzRSUzQyUyRmRpdiUzRSUzQyUyRmRpdiUzRQ==Trying to decide what wireless access points to deploy at your company? Download our Buyer’s Guide to Wireless Access Points! Within this guide, we’ve included: overviews of each Wireless Access Point Architecture, pros and cons to consider, and question sheets to make sure you choose the best option for your organization.[image_with_animation image_url=”12479″ alignment=”” animation=”None” img_link_target=”_blank” box_shadow=”none” max_width=”100%” img_link=”https://stormwindstudios.com/cisco-buyers-guide-wap-landing-page/”]Loved this video? Hated it? Tell us! We want to know! Add a comment at the bottom of this page with your ideas for next week’s VBlog! What do you want StormWind to talk about?

Hey, folks. We just wanted to take a couple of minutes to go ahead and discuss the three ways you have of managing your access points: the autonomous architecture, the cloud-based architecture, and the split-MAC architecture. All right, take care. No, I’m just kidding. Of course we’re going to talk about the three methods and their implications.

The first one is primarily going to be intended for those smaller organizations. Now, that phrase definitely has an asterisk associated with it, because when we think about an autonomous architecture, we’re typically thinking of a very small deployment, maybe only onesie twosie access points. There’s really no need to have a centralized architecture if we’ve only got one or two access points.

That’s really one of the key implications you want to keep in mind for the autonomous architecture. If you have a relatively small environment, maybe not a lot of heavy-duty usage on your wireless network, if you’re just talking about dropping in an access point so people can connect to it while they’re waiting for their coffee, the autonomous architecture is going to be perfect for that. It is very budget-friendly. These autonomous access points are considered extensions of your switch network. They are fully-functioning devices. They are self-contained. They even have the ability to connect your SSIDs to your VLANS.

Now, don’t let this graphic confuse you. Don’t let it fool you, because you can have an autonomous architecture that has hundreds if not thousands of access points. But the other implication you want to keep in mind with the autonomous architecture is that you lack any centralized control. If you’ve heard the cliché “too many cooks in the kitchen spoils the brew,” or the batch or whatever the heck it is they’re cooking, that’s what you’re going to run into with these autonomous access points.

They are fully self-contained. They are going to do their own thing. There’s no sort of coordination with their radio settings. We could actually have these autonomous access points bouncing up against each other, which is definitely a situation we don’t want. But if we’ve only got one or two of them — heck, even five of them — the autonomous architecture can be a perfect scenario for managing your access points, and that term is used somewhat loosely. You can manage them, you just have to manage them individually.

The second option you have for managing your access points is to utilize a cloud-based architecture. There are a wide variety of vendors that are now providing this solution. Perhaps one of the more popular ones is the Cisco Meraki devices. That’s primarily what we would focus on here, is looking at that cloud-based architecture where all of the managerial functions are available to you in the cloud. You know, those mythical things that are always floating above our head, spying on us. No, this is actually a good cloud.

I like to think that this scenario is extremely useful for administrators who are maybe volunteering for a nonprofit organization, the CIO who may not be able to be there on a daily basis, but they still want to provide some sort of architecture that they could manage remotely. That’s really where the cloud-based architecture proves its worth.

There are many other scenarios where this can be an extremely useful option. The key thing that you want to keep in mind with this particular architecture is, for lack of a better term, it’s kind of a hybrid between the autonomous architecture and also the split-MAC architecture. The autonomous side of it comes from the access points themselves. I can’t speak for any other vendors, but when it comes to the Cisco Meraki devices, those are very much considered autonomous access points. Yes, they are connected up to the cloud, but as far as the device itself, it is fully functioning, a self-contained device that you can log into individually and make settings there.

The reason I call it a hybrid is from the cloud dashboard you can actually manage all of your access points, and that’s something that’s simply not available with a traditional autonomous architecture. You have to go into each device individually to change its settings. With this, you also get the ability to coordinate your access points, which is something that leads itself more towards the split-MAC architecture, where you could look at two or three access points, look at their radio settings, and adjust them as needed and they’ll all work in unison with each other.

The other stream is going to come from the actual real-time data, the actual wireless connectivity. That entire data process is going to be handled by the access points themselves. So while your wireless clients are connecting to the web and doing work like watching Netflix and checking out their Facebook, that is going to be entirely maintained by the access point. But as far as the managerial traffic, the frame information, security settings, reporting for the radio resource manager, all that is going to be managed via a separate data stream back to the controller.

The key implication with this particular type of architecture is of course cost, but that cost does have its advantages. What I mean by cost is lots of access points. Dedicated controllers. If we want to have some sort of disaster recovery, that’s going to include a backup controller. If we’ve got multiple locations, that includes multiple controllers. It is somewhat more expensive, but on the back end you have reduced overhead costs. Since you are centralizing everything, you don’t have to drive out to a separate location to fix an access point, to change its radio settings. You don’t have to log into a separate interface to maintain the security configurations. You can divvy that all out from the centralized location of the controller.

Before we had that cloud architecture, this was the de facto standard, but now, more and more organizations are actually looking at, okay, I’ve actually got three options. I could look at the autonomous architecture, a cloud-based architecture, split-MAC architecture. Pros and cons to all three of them, just like we find anywhere else in life. But you really, really need to look at it from a design perspective — which of course includes budget — to decide which one’s going to be best for your own organizational requirements.

That’s all we’ve got, guys. Take care.”Trying to decide what wireless access points to deploy at your company? Download our Buyer’s Guide to Wireless Access Points! Within this guide, we’ve included: overviews of each Wireless Access Point Architecture, pros and cons to consider, and question sheets to make sure you choose the best option for your organization.[image_with_animation image_url=”12479″ alignment=”” animation=”None” box_shadow=”none” max_width=”100%” img_link=”https://stormwindstudios.com/cisco-buyers-guide-wap-landing-page/”]Loved this video? Hated it? Tell us! We want to know! Add a comment at the bottom of this page with your ideas for next week’s VBlog! What do you want StormWind to talk about? 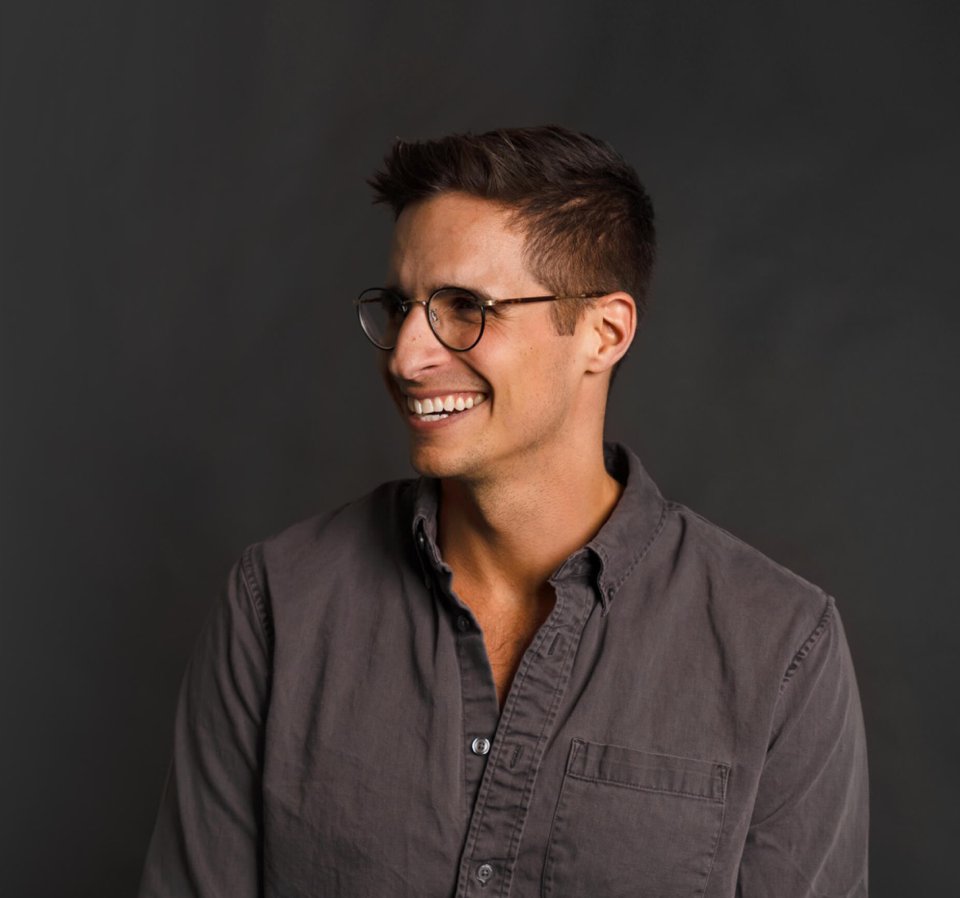